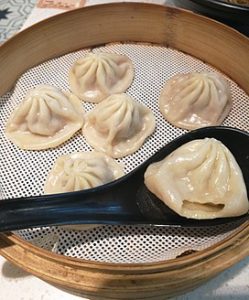 Xiaolongbao (/ˈʃaʊlɒŋˌbaʊ/) refers to a type of small Chinese steamed bun (baozi) traditionally prepared in a xiaolong, a small bamboo steaming basket, hence the name. Xiaolongbao are often referred to as a kind of “dumpling”, but should not be confused with British or American-style dumplings, nor with Chinese jiaozi.

In some parts of China and overseas, Xiaolongbao may specifically refer to a kind of soup dumpling, Tangbao (Chinese 汤包), from Jiangsu province, especially associated with Wuxi and Shanghai (Shanghai was formerly a part of Jiangsu province). In Shanghainese, these are also known as siaulon moedeu or xiaolong-style mantous, as Wu Chinese-speaking peoples use the traditional definition of “mantou”, which refers to both filled and unfilled buns. Shengjianbao are very similar to Tangbao but are pan-fried instead of steamed.

Raw tangbao
There are numerous styles of xiaolongbao in Jiangsu cuisine. Shanghai-style xiaolongbao originated in Nanxiang, which was a neighboring village of Shanghai in Jiangsu that eventually ended up becoming an outer suburb of Shanghai’s Jiading District.The inventor of xiaolongbao sold them in his first store in Nanxiang next to the town’s notable park, Guyi Garden. From there the xiaolongbao expanded into downtown Shanghai and outward. The Suzhou and Wuxi styles are larger (sometimes twice as large as a Nanxiang-style soup dumpling) and have sweeter fillings. The Nanjing style is smaller with an almost translucent skin and less meat.

Two specialist xiaolongbao restaurants have a particularly long history. One is Nanxiang Mantou Dian (Nanxiang Bun Shop), which derives from the original store in Nanxiang but is now located in the Yu Garden area. It is famed for its crab-meat-filled buns. The other is Gulong Restaurant, at the original site next to Guyi Garden in Nanxiang.

Chinese buns, in general, may be divided into two types, depending on the degree of leavening of the flour skin.Buns can be made with leavened or unleavened dough. Those made with unleavened dough use clear water for mixing, the skin is thin and the fillings large. It is frequently made in Nanxiang but is imitated elsewhere, calling it Xiang-style. Steamed buns made with raised flour are seen throughout China and are what is usually referred to as mantou. Steamed xiaolongbao made with partially raised flour are more commonly seen in the south. This means that their skin is tender, smoother, and somewhat translucent, rather than being white and fluffy. As is traditional for buns of various sizes in the Jiangnan region, xiaolongbao is pinched at the top prior to steaming, so the skin has a circular cascade of ripples around the crown.

Soup dumplings are created by wrapping solid meat aspic inside the skin alongside the meat filling. Heat from steaming then melts the gelatin-gelled aspic into soup. In modern times, refrigeration has made the process of making tangbao during hot weather easier, since making gelled aspic is much more difficult at room temperature.

Xiaolongbao are traditionally eaten for breakfast. The buns are served hot in the bamboo baskets in which they were steamed, usually on a bed of dried leaves or paper mat, although some restaurants now use napa cabbage instead. The buns are usually dipped in Zhenjiang vinegar with Chili crisp.

Traditionally, tangbao soup dumplings are a kind of dim sum (à la carte item) or “xiaochi” (snack). The buns are usually dipped in Zhenjiang vinegar with ginger slivers. They are traditionally served with a clear soup on the side.Around Shanghai, “tangbao” may be eaten throughout the day, although usually not for breakfast. They form part of a traditional Jiangnan-style morning tea (早茶).[citation needed] In Guangdong and the West,it is sometimes served as a dish during Cantonese tea time. Frozen tangbao are now mass-produced and a popular frozen food sold worldwide.